Back in November, I was hired as the Winnipeg correspondent for Akimbo. I've since written a few reviews for exhibitions at Plug In ICA, Platform Gallery, and ARCH 2 (the gallery for the Faculty of Architecture at the University of Manitoba).

"For My Dad", Sherry Walchuk at ARCH 2

I also wrote a review for Kolaj, a new-ish magazine based in Montreal. You can read more about the magazine here.

“All of the Above: Works by Greg Lamarche” at Graffiti Gallery
by Lisa Kehler

When graffiti moves from the street into the gallery, there is often mixed reaction. Despite the fact that its very essence springs from an anti-establishment mentality, Graffiti Gallery in Winnipeg, Manitoba is devoted specifically to the principles associated with this form of street art. “All of the Above: Works by Greg Lamarche” (16 May-5 July 2013) further confirms that the division between high and low art may no longer apply to this medium.

Lamarche’s work is anchored in counter-culture history. The artist is a product of the New York graffiti scene of the early 1990s. In 1992, he launched the magazine Skills, a cut-and-paste effort that was a collection of photocopied images of graffiti. Finding a voice in collage seemed a natural progression.

Lamarche’s works are marked by a highly stylized interpretation of typography, a standard in graffiti writing. He is known for crisp lines, solid fills, and striking colour choices, which he applies to his collage work with delicate cuts and extremely precise placement. In his artist statement, Lamarche cites his recent collage work as having an increasing influence on the way he creates letters and paints walls.

At the gallery, massive brick walls are saturated with murals, prints hang from metal pipes, and ink drawings are tacked to a floating black wall. The exhibition includes collages, sculpture, and a site-specific installation. Typically, when an artist breaks through to a new style, he leaves behind his past styles. That is not the case with Lamarche. The art on view traces the evolution of Lamarche’s style through work created within the last few years. His ability to glide back and forth between them all is noteworthy. Lamarche’s creativity is channeled seamlessly and prolifically between collage, painting, drawing and sculpture.

In Lamarche’s collages, letters have a two-fold function: they represent their alphabetic utility, but once assembled on canvas, they are re-envisioned as pure abstract forms. In The I’s Have It (2008), the letter I appears in countless colours, shapes, and sizes. Lamarche’s configuration creates a form that mirrors the rise and fall of an EKG wave.

A key work in the exhibition is Italy (2012) from the “City to City” series. Six panels worth of paper scrapings from walls in Venice are assembled. Peeled layers reveal patterns, letters and varying textures hidden underneath. The collaged panels are hung horizontally in a tight fashion, resulting in a clever recreation of a mini buffed wall. Italy is the embodiment of Lamarche’s career: creating art from the street that easily transitions to the gallery. 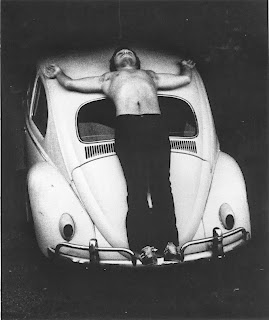 The New Museum is about to open their survey of Chris Burden's work, and again, I curse my familial roots for being set down  in Manitoba, rather than New York. Chris Burden: Extreme Measures, opens officially tomorrow.

The curatorial statement is as follows:

Burden’s epoch-defining work has made him one of the most important American artists to emerge since 1970. Spanning a forty-year career and moving across mediums, “Extreme Measures” presents a selection of Burden’s work focused on weights and measures, boundaries and constraints, where physical and moral limits are called into question.

Over the past four decades, Burden has created a unique and powerful body of work that has redefined the way we understand both performance and sculpture. Startling at the time, his early works remain some of the most extreme and influential performances of the era, inspiring younger artists through his radical approach not only to the body but also to issues within a larger sociopolitical context. In the 1980s, he began a series of ambitious sculptures of increasing size and complexity using materials common to childhood playtime activities (such as erector sets, toy soldiers, model train sets, toy vehicles, and construction models) to create miniaturized yet still monumental reconstructions of structures and environments. These works diagram dense political and historical relationships, and register the depth of our mechanical and technological imagination.

A personal favourite: Through the Night Softly, 1973

Aganetha Dyck is the Best

The wool sweaters made it safely to the gallery somewhere between 1976 and 1981. From her Shrunken Clothing Series, Sizes 8 - 46. 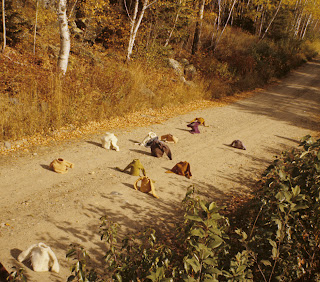 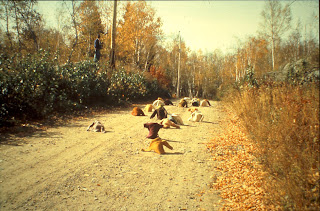 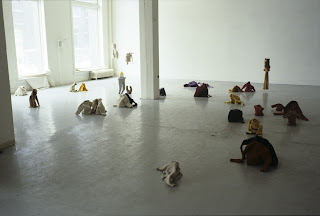 images from here
Posted by Lisa at 7:05 PM No comments:

Found at Beth Stuart's blog, here.
Posted by Lisa at 11:25 AM No comments:

A favourite tumblr of mine is 'angelheaded hipsters burning'. I just came across this old post which features a two-page typed list of recommended reading according to Allen Ginsberg. Guess I'll start at the top... 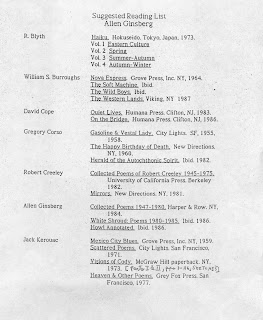 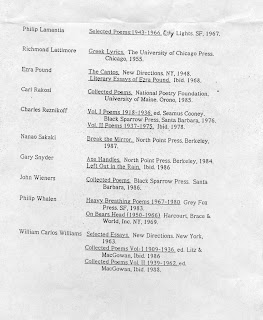 I just finished reading an article written by Jerry Saltz on 'outsider' art. it was good, and roughly echoed my sentiments on the subject. I was most moved by a comment made by The Museum of Everything, however.

Here it is in its entirety:

"Mr Saltz, well said. We humbly bow our heads and prepare to march on midtown. Yet within your huggable call to arms, there is more to be uttered.

The Outsider Art Fair has blossomed under Andrew Edlin's spirited leadership. This weekend New Yorkers are drifting through the gallery spaces like never before, wowed by the delicate, private worlds on display.

So is it a blip or a revolution?

Artists who make for themselves, not for us, whose languages are expressed without mind to the market, museum or masses, reveal essential truths about human creativity.

Contemporary art opened our eyes to their unusual forms and formats; yet the Duchampian gatekeepers of art reject those who do not or cannot provide context. That's why the hidden metaphors of invisible makers are rarely given priority.

What you are actually talking about is segregation - no more, no less.

Why is Bill Traylor, one of the first African-American artists, not in institutions for historical American art? Why is Henry Darger, the grandaddy of post-modern fantasy, not in Tate Modern? Why are the assemblages of Judith Scott, the poster-girl for learning-disabled artists, not perceived as major artworks by major institutions?

The problem, as you rightly finger, are the words themselves. Since we first spotted this brilliant, unruly stuff, we've been fencing it in. We call these discoveries brut, naive, visionary, outsiders ... dammit, we even call them primitives.

That is why the work speaks so loudly. It represents us. It is us.

So you got it spot on, Mr Saltz. There are no outsiders. There is no outsider art. We were created, so we must create. These artists reach back to the caves and leap into the cosmos. And their vast, global, secret, alternative history of art has existed long before the word "art" decided what was hot and what was not.

The troops are assembled. The target is in sight. Creativity is a human right, not just for some, but for all. Together we will change the trajectory of art forever.

Vive la révolution, The Museum of Everything "
Posted by Lisa at 9:42 AM 3 comments:

Lisa
the only people for me are the mad ones, the ones who are mad to live, mad to talk, mad to be saved, desirous of everything at the same time, the ones who never yawn or say a commonplace thing, but burn, burn, burn like fabulous yellow roman candles exploding like spiders across the stars and in the middle you see the blue centerlight pop and everybody goes 'Awww!' "